CyberGhost is a Romanian-based VPN company that has been around for 8 years, wherein 2017 they were acquired by KAPE and now one of the largest VPN providers in the world.

They offer a ton of features as such, AES 256-bit encryption, and OpenVPN along with other tunneling protocols like IPSec.

Back in 2011 they were founded and operated by a 55 person team in Romania and unknown to the VPN industry. Today, CyberGhost VPN has 15 million users worldwide.

Their networks have over 60 different countries and 4,000 plus server locations across the United States, UK, European Union, and Asia (Hong Kong, Japan, and Singapore).

Their VPN is compatible with these devices; 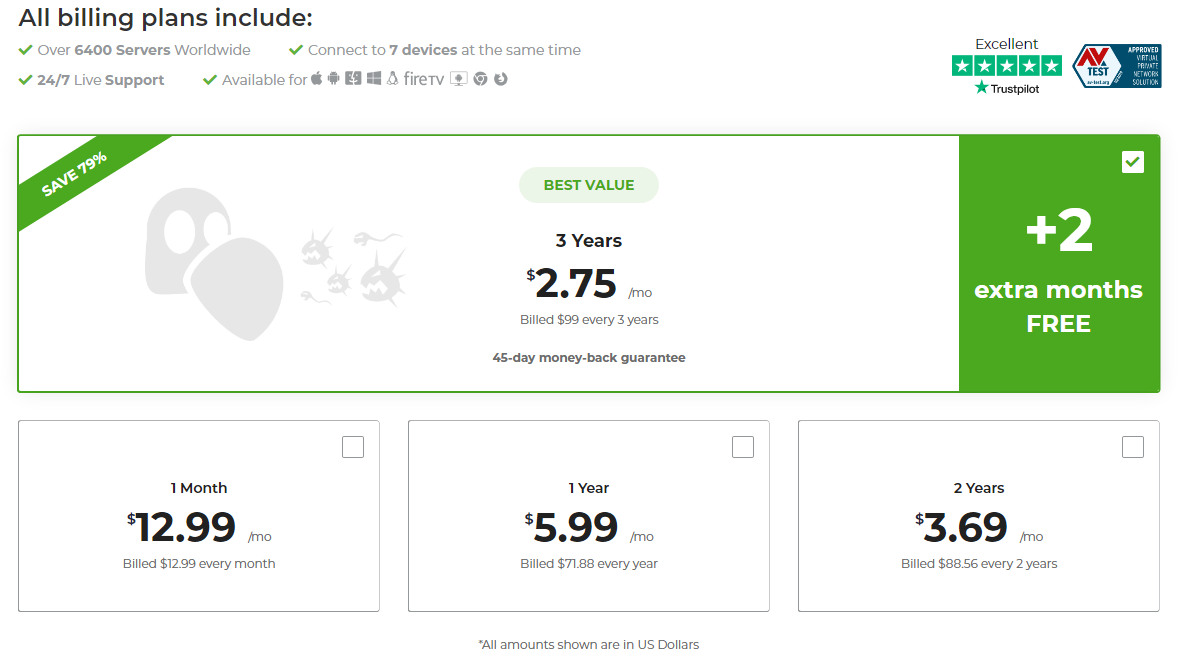 A one-month plan with CyberGhost usually cost you $12.99, a bit higher than the industry price of $10.10 per month. For this subscription, included are the tools that will help you secure your connection without any other additional cost.

Like other VPN companies, they offer different payment intervals, you can pay more up-front for longer intervals and save more overall.

Even though the three-year plan is tempting, you must try it out first to make sure CyberGhost is a great match for your requirements.

You can purchase a plan with payment methods like Paypal, Bitcoin, prepaid gift cards from Best Buy, or others.

You can use CyberGhost up to seven devices simultaneously, great if you have different devices or sharing it with your family members. The average for a VPN company is five devices which is great news for CyberGhost users. 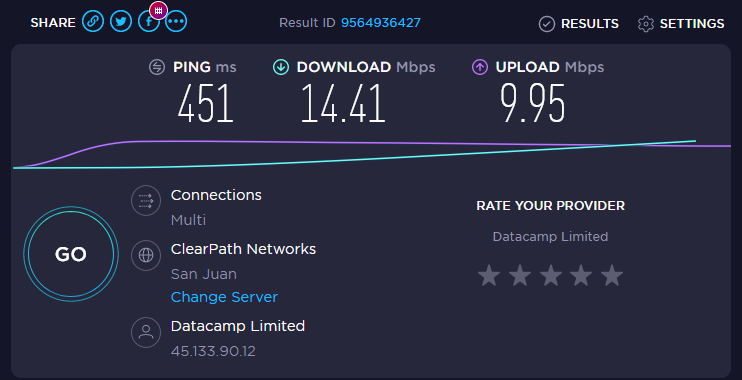 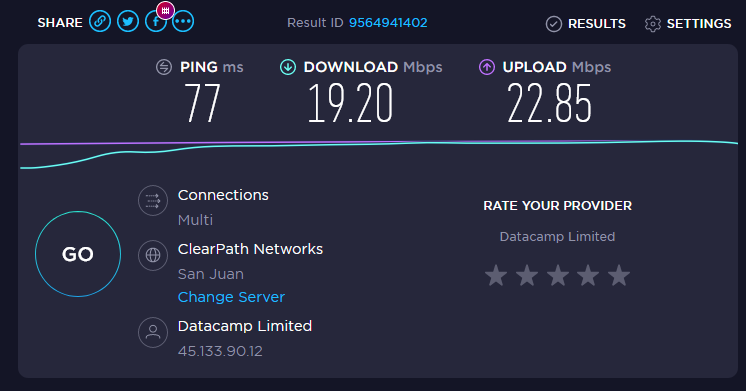 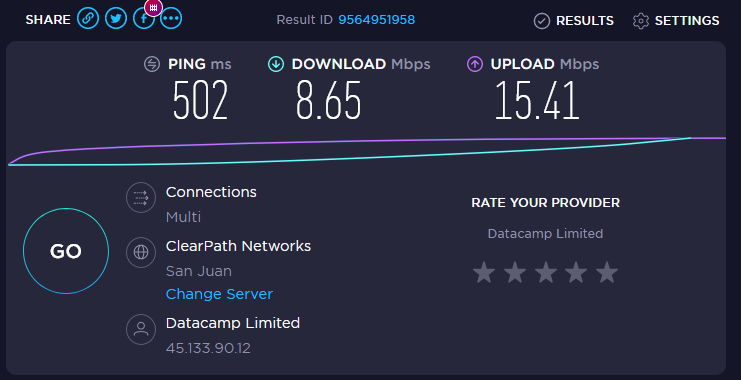 Speed will factor my internet speed, the closer I am from the server the faster speed I can get. I am based in SE Asia, which explains why Germany and the USA have a slow connection.

While there are many companies that advertise as “no-logging policy”, but their Terms of Service says otherwise. Many providers log your data and sell it to other companies, which defeats the purpose of having a VPN.

Easy to use App 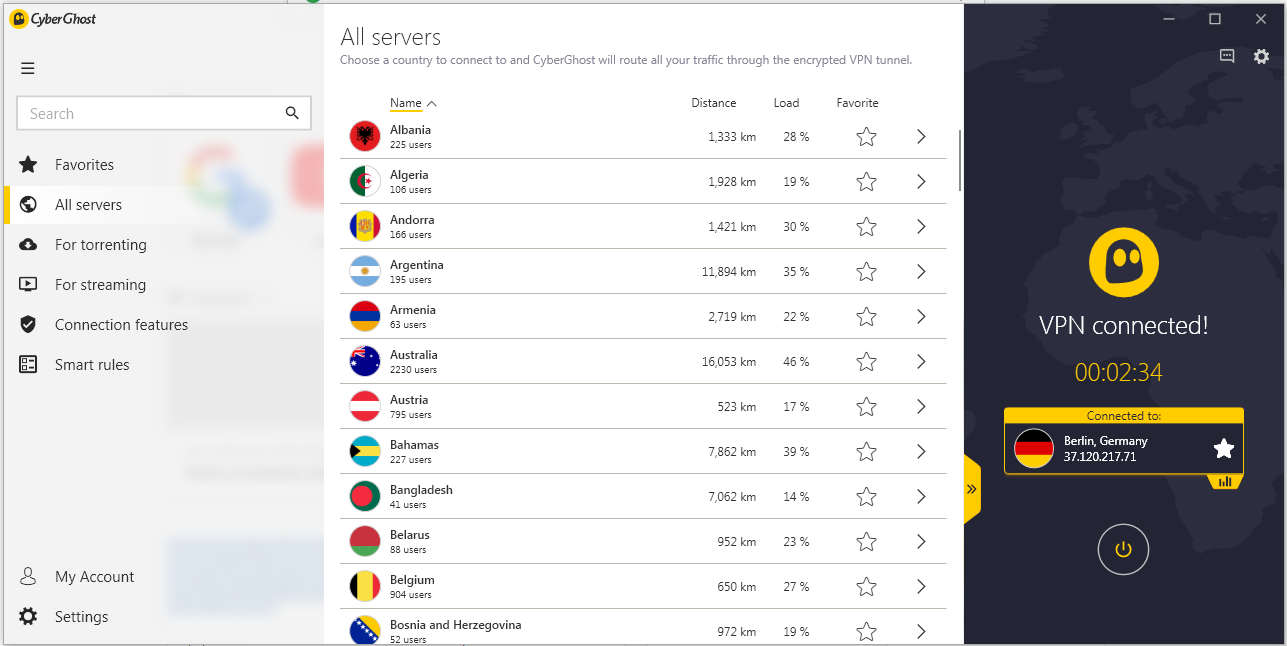 What I love about CyberGhost’s app is that it is easy to use, everything you need is in their place and compatible with different devices, and OS.

From Windows PC to Android app, it works seamlessly and fast.

TOR or The Orion Router is an anonymous network that relays your data in different servers, making it impossible to point exactly where you are from.

Having a VPN with the TOR network is really a must, and its a great lifesaver. Good thing CyberGhost VPN is already TOR compatible.

Users can get total anonymity with a bonus of using a VPN in different countries with their strict censorship laws.

I mainly used CyberGhost for Netflix and other streaming services which is one of the reasons to get a VPN. They offer specific Netflix US servers to maximize the speed of the stream and give you the fastest server.

The streaming is fast, my internet did not suffer any lag or buffering. I can watch US-based shows and other UK-based even I am in Asia.

While Torrenting is a sketchy topic (we do not promote it), CyberGhost allows torrenting using P2P on their servers. Which is why users are happy with this VPN.

CyberGhost can be used up to seven simultaneous use of devices, which is great for an entire family to use. This device limit applies to all the plans they offer.

Good customer service is one of my priorities when subscribing to a service, a live chat is great because you can get help in real-time.

CyberGhost made advancement in their live chat and customer service, its fast and they have a lot more CSR agents than before.

If you need any help, just click the chatbox on the bottom-right of your screen.

When subscribing to a company, make sure you do your research on their history. This will give you an idea of what kind of company they are, and how they can help you in the future.

CyberGhost was sold to Kape Technologies (known as Crossrider), an Israeli-based tech company that is known for creating and distributing Malware.

There are articles around warning the public about these malware Kape Technologies created. Malwarebytes even created an article on how to remove one of Crossrider’s malware.

CyberGhost CEO admitted that both companies had different goals, and they seek to protect user’s data and privacy as a VPN provider.

I noticed an intermittent connection on the US servers for Netflix US, I am 100% sure that my internet is working well. It could be a glitch or something because it happened more than once.

7 AM and 10 PM it is hard to disconnect to the CyberGhost app, I am not sure why but disconnecting it makes the app unresponsive and I have to tap more or wait for the app to respond. This doesn’t happen often though, no idea why.

Like above, sometimes the app will freeze and I have to restart my phone in order to use it. Or sometimes it crashes and I have to clear my app’s cache and start again. It happened four times since I signed up with them. On Windows PC, it freezes once and it never happened again.

Once you signed up, you have 45-days before you can terminate your contract and get your money back on a yearly plan, and 14-days for the monthly plan. No questions asked policy for all their VPN Plans.

You can have your refund by going through their website CyberGhost.com

Do I Recommend CyberGhost?

Yes, I appreciate that their app will work with any devices, and your subscription can be added up to seven devices.

Overall, I recommend CyberGhost to anyone who is looking for a VPN service. Their security, apps, and tools are useful to protect your data and information.

Make sure you get a discount when signing up, to shave off a few dollars on their VPN plan.